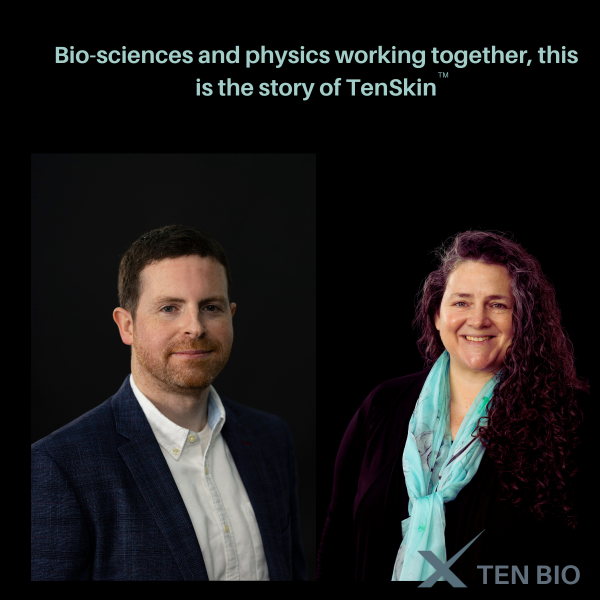 Entering our third year since spin out, it’s time to celebrate the origins of our technology which has brought Ten Bio early success in a range of markets.

The origin of our invention story stems from Robyn Hickerson, our co-founder and CEO, and her work at the University of Dundee. In the course of her research on the development of therapeutics for rare skin diseases, Robyn utilized various skin models. These included animal, cell-based and ex vivo models, but all had significant limitations, such as the relatively short duration of skin viability with ex vivo skin. Her research required more than these models could offer, it required a model that could more closely mimic human skin in its natural state, thus closing the gap between in vitro and in vivo studies. Applying her understanding of skin biology and observations about how skin behaves in vivo, Robyn had several ideas about how to restore ex vivo human skin to as close to its natural state as possible.

Researchers have long attempted, with some success, to extend skin viability using improvements to the media and culture conditions in which the skin is incubated. Robyn however focused on the observation that skin when removed from the body relaxed and contracted to a smaller area due to its inherent elastic properties. Combining this observation with the knowledge that surgeons working with human skin have long placed emphasis on the tension of the skin as an important consideration in surgical outcomes, the idea of restoring a natural level of tension in the skin sample came to the fore as a potentially significant factor in mimicking skin in its natural state.

The challenge was not trivial as skin tissue is an inhomogeneous material with complex physical and mechanical properties. How could a loose piece of ex vivo human skin reliably have its physiological tension restored and fixed onto the perfect supporting framework suitable for routine experimental work? It wasn’t until 2013 when Robyn was introduced to Michael Conneely, Ten Bio’s co-founder and COO, that those ideas could begin to become a reality.

Already familiar with the mechanical properties of biological tissues through his position in the Division of Physics and work in novel drug delivery methods, Michael was quickly able to draft schematic drawings and produce prototypes suitable for initial trials. During this time, NHS skin banks in Scotland (specifically the Tayside Tissue Bank) were key enablers of progress, as suppliers of skin samples throughout the early testing phases.

Although these first iterations of our culture frame appear grossly similar to that which we use today, there was still another two years of research and development before the model was fully ready for routine use, with skin reliably held not just at tension but at the optimum tension, thereby providing the extended viability of the full thickness human skin model of which we are now so proud – TenSkin™.

Early in its development TenSkin™ was surprising and delighting those who worked with it and those who saw its results. Indeed, these capabilities enabled Robyn’s academic group to completely eliminate their testing on mice, instead using TenSkin™ to deliver more clinically relevant data. It was clear that this technology could have value to researchers around the globe working on a wide range of skin related R&D.

The route to commercialization had begun, cumulating in our spin-out from the University of Dundee in 2020. At Ten Bio, we are incredibly proud of our TenSkin™ technology, which is the result of keen observation, innovative thought processes and most importantly, combining perspectives between scientific disciplines.